Can the Language of Love Tear Down the Tower of Babel in 2023?

Imagine for a moment you’re God sitting on a puffy white cloud floating above the earth. You cup your hand to your Divine ear. You listen as people talk using a multitude of languages. Your heart overflows with joy as the symphony of voices resonates with heavenly tones of love and peace.  You rejoice as you hear humanity speaking the language of the heart—words filtered through the wisdom and insights of God’s Creative Spirit. You’re on Cloud 9. 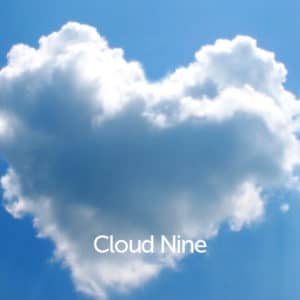 Scripture says humanity once spoke with a united language (Genesis 11: 1-9). In my imagination, I wonder if it was the language of compassion and truth—the language of love. When people talked—like at Pentecost regardless of the language spoken—those listening understood the universal meaning underneath the words because they listened with their hearts. 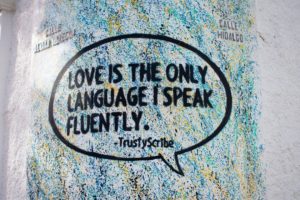 And maybe it wasn’t God who scrambled our languages when we created our Tower of Babel—maybe it was humanity. Humanity beat the plowshares of the language of love into swords of power and division. We created a world filled with babel—confused noises from throngs of conflicting voices.

We confounded our speech so we no longer understood each other. We scrambled words, tucked them into falsehoods, and created strife. We twisted words and stopped listening to each other. We created a cancel culture. 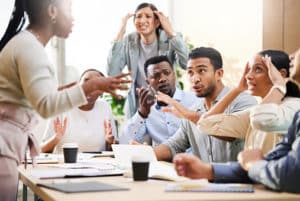 We demanded our words were right and others were wrong. We used words to manipulate. We no longer cared about the common good.

We came up with new words to grab political power—fancy slogans that sounded appealing—but had no depth. No truth. No common solution. Only more division. More anger and confusion.

We tried to pull each other into our country club churches, claimed we had the truth and others did not. Others were on the wrong path. Others were condemned unless they used our words and followed our teachings.

Years ago, I met a gentleman at a conference. We chatted over lunch.

“You speak a lot about God.” He laughed.

“He’s kind of a big deal to me since I lost my earthly father when I was young,” I replied. “Do you believe in a Higher Power?”

“Yes,” my lunch-mate replied. “But I don’t like the word ‘God.’ Too many people beat each other up with it.”

“What word do you like to use?” I asked.

“I like to refer to God as ‘Mr. Magoo.’ When the steel beams of life align, I trust it’s the Creator. I look up at the sky and say with a chuckle, ‘Oh, Magoo! You’ve done it again!’” 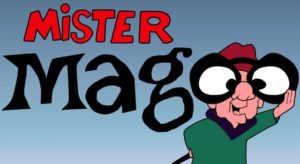 So began a life-long friendship with the gentleman who introduced me to “Mr. Magoo.”

Religious scholar D.T. Suzuki in Mysticism: Christian and Buddhist wrote, “Terminology is all that divides us and stirs us up to a wasteful dissipation of energy. We must however weigh the matter carefully and see whether there is really anything that alienates us from one another and whether there is any basis for our spiritual edification and for the advancement of a world culture.”

Suzuki suggests there are “universal truths” through which the Divine reveals wisdom to us. If we can look underneath the mental hood of words and semantics, we can listen with the ears of the heart and discover the common divine truths from which we’re created and from which we are called to live

A truth is considered to be universal if it is logically valid in and also beyond all times and places. Such a truth is seen as eternal. The concept of universal truths is opposed to relativism, which asserts that all facts are merely relative to one’s perspective. 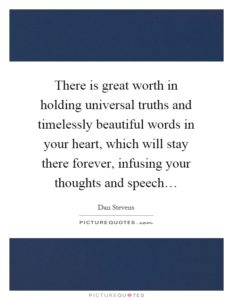 Trappist monk Thomas Merton, who was friends with Suzuki, remained strongly rooted in his Christian faith. But Merton believed we can learn from each other’s traditions as a way of increasing our own ability to understand and live from the universal truths that unite us.

“I think that we have now reached a stage of religious maturity at which it may be possible for someone to remain perfectly faithful to a Christian and Western monastic commitment and yet learn, in depth, from a Hindu or Buddhist discipline or experience. Some of us need to do this in order to improve the quality of our own monastic life.”

Shortly before his death, Merton stated, “I do not believe that I could understand our Christian faith the way I understand it if it were not for the light of Buddhism.”

Is it True, Necessary, and Kind?

Bernard Meltzer, a United States radio host, gave us a simple three-part test we can apply as a practical way of living the universal language of love: Is it True? Is it Necessary? Is it Kind? 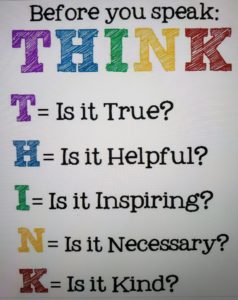 “Before you speak ask yourself if what you are going to say is true, is kind, is necessary, is helpful. If the answer is no, maybe what you are about to say should be left unsaid.”

In this age of Covid and political, civil, and institutional division, perhaps God is inviting us to reclaim the universal language of love—our common language before we built the Tower of Babel. Maybe we can learn from each other while remaining rooted in our own faith traditions. Maybe we can tear down our own babbling towers once and for all and seek the universal truths underneath the semantics.

In 2023, I want to do the hard work. Listen more and speak only if I can do so in a way that is truthful, necessary, and kind. I want to return to the Universal language of love. Helped by the Creator, I hope I can make some progress.

Will you join me? In this new year, let’s get beyond the semantics so we can point to and understand the deeper universal truths with which we all aspire to live.

Let’s tear down the tower of bable and return to the language of love. It’s our native tongue. 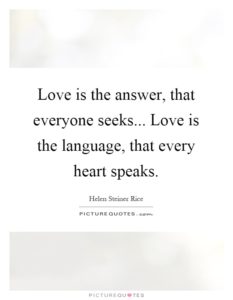 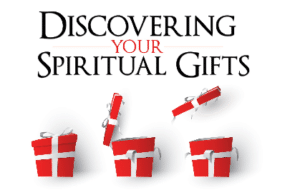 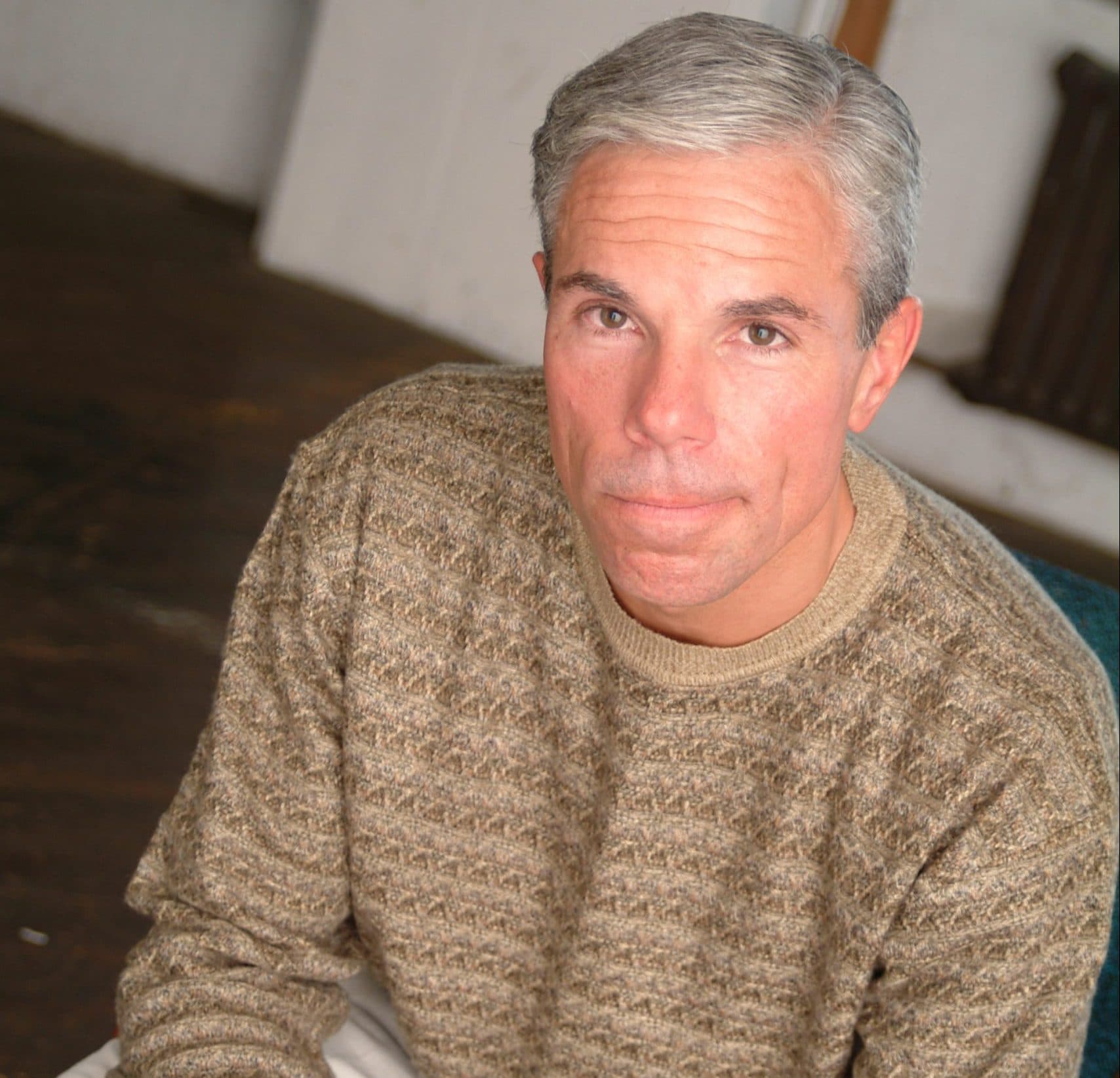 Through Our Warts We Are Healed

As we draw close to saying goodbye to an old year and welcome a new year, consider listening for the metaphors in your life through which God communicates with you.
Let the metaphor transcend you beyond intellectual thought.